The first public reading of ‘Seadrift’ 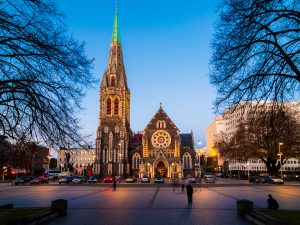 Although portions of James Edward FitzGerald’s ‘Seadrift’ had been viewed during the 2006 Heritage Week Exhibition, the full script and accompanying watercolours had never been presented to the public. This changed on Sunday 23 September, 2007 with the first public presentation of the full ‘Seadrift’, held in ChristChurch Cathedral. Councillor Bob Parker (later to become Mayor and Sir Robert) was invited to read ‘Seadrift’ and enthusiastically agreed.

The reading was introduced by David McPhail, editor of the Limited Edition Set Godley Gifts, and accompanied by the presentation of FitzGerald’s ‘Seadrift Watercolours’ on a large screen situated in the centre of the Cathedral Nave. A second highlight of the evening was an engaging and informative essay written and presented by Mr Haydn Rawstron, Trustee of The John Robert Godley Memorial Trust, describing the journey and significance of ‘Seadrift’ for the Godley family, and the people of Christchurch.